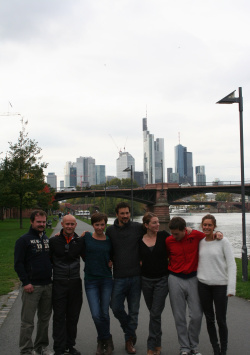 On the set of HIN AND WEG

Currently, the award-winning screenwriter and director Christian Zübert (Three Quarter Moon) is shooting his latest film HIN UND WEG, a tragicomedy, in Frankfurt and the surrounding area. Today, the press was invited to shoot a scene on the banks of the Main River, where the actors FLORIAN DAVID FITZ, JÜRGEN VOGEL, JULIA KOSCHITZ, MIRIAM STEIN, JOHANNES ALLMAYER and VICTORIA MAYER first confronted the photographers' cameras and then the journalists' questions before shooting a short sequence.

And that's what the film is about: Every year Hannes goes on a bike tour with his wife Kiki and his best friends. And each year, a different member of the group can decide where the journey takes them. This time it's Hannes' turn ... to pick Belgium of all places. The enthusiasm is limited, but soon the anticipation for the journey together and the prospect of crazy jokes and silliness outweigh the enthusiasm.

On the way, the friends learn the true reason for the unusual destination: Hannes suffers from an incurable nervous disease and wants to go to Belgium to receive euthanasia - it should be his last journey!

At first the group reacts shocked and helpless, but then a wild, unique tour begins, because Hannes' decision shows the friends how precious life really is. With a list of things that still want to be experienced and the feeling that they can't lose anything anymore, they celebrate life like never before...

The atmosphere at the press event was very cheerful and cheerful. The chemistry between the actors seems to be right and even if only a fraction of the good mood that could be observed on the set can also be felt in the film, the audience can look forward to a very amusing work despite its rather sad theme.

The conversations with the Frankfurt journalists were, of course, primarily about the shooting in the Main metropolis. While it was the first time for Florian David Fitz that he filmed in Frankfurt, Jürgen Vogel has already stood in front of the camera here several times, among other things for a "crime scene". And for Julia Koschitz, the city is no stranger either, for the Austrian-born student finally graduated from the Elisabethen-Gymnasium in Frankfurt. But it wouldn't feel like coming home anyway, says the actress, she simply hasn't lived in Frankfurt for too long. Koschitz found only positive words about the renewed cooperation with Florian David Fitz after the time at "Doctor`s Diary". And while Fitz doesn't like to be called a "swarm of women" or even "mother-in-law's darling" at all, his film partner confirmed that the female fans would be "excitedly attentive" when they discover the actor.

All the actors were impressed by Frankfurt itself, even if they didn't really see much of the city. The tight shooting schedule doesn't allow that. Nevertheless, it was agreed that the fascinating skyline provides a really unique and very atmospheric backdrop. But not only Frankfurt, also the other locations in the region like Wiesbaden or Idstein have left a very positive impression on the team.

It will take a little longer until "There and away" comes to the cinemas. But what could be learned about the film during the visit to the set and what could be felt about the good chemistry between the actors, gives hope for an entertaining, funny and touching tragicomedy, which is not only characterized by beautiful pictures of the Frankfurt skyline and the other locations in Hessen, the Rheingau and Belgium. We'll know more in the fall of 2014.

HERE you can see some impressions from the set visit!