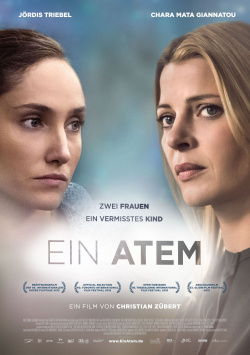 One breath - winning free tickets for the premiere

Two women. A lost child. And a breath that unites both and decides everything.

The one, the young Greek Elena (Chara Mata Giannatou), has had enough of the misery in her country and just wants to get away. Against the will of her friend, she moves from Athens to Frankfurt to work in a bar. But at the health check she learns that she is pregnant. Elena sees her dream of a new life burst. A child was not included and does not fit in with her precarious situation without a fixed income and without health insurance. Through a friend she gets a job as a nanny with a wealthy family. Elena opens up a completely different world: clean, stable and sorted. Tessa (Jördis Triebel) and her husband Jan (Benjamin Sadler) are both successful in their profession and have clear ideas about what is right for them and their one-and-a-half-year-old daughter Lotte. A maximum of one piece of sweets a day and raisin rolls only from the organic baker. Elena patiently endured the perfectionism and moods of the landlady. But the double responsibility for the foreign child and her own, still unborn child overtaxes her. With fatal consequences: In a short moment of carelessness she loses sight of Lotte and cannot find her again. Helpless and panic-stricken, Elena escapes and returns home.

A nightmare breaks out over Tessa and her husband. Deep conflicts in their relationship come to light. Tessa is accused by Jan that Lotte would still be there if she hadn't decided to pursue her career but had stayed at home. The image of the tough manager mother gives way to that of a vulnerable and torn woman who is under pressure from all sides - and is now fighting like a lion mother for her child. Because without further ado Tessa goes to Athens, where she suspects Elena. An uncompromising journey begins that takes both women to their limits and closer to themselves.

ONE ATEM is an intense and intimate drama about two women who are both searching for their role as mothers. Embedded in a highly exciting thriller plot, Grimme prizewinner Christian Zübert (LAMMBOCK, DREIVIERTELMOND, HIND UND WEG) succeeds in combining the socially virulent topic of reconciling family and career with the current European situation.

On 19.01.2016, the film, which was shot in Frankfurt in part, will celebrate its premiere at CINEMA in Frankfurt. Benjamin Sadler, Chara Mata Giannatou, Ipek Zübert (script), Ulf Israel (production) and Christian Zübert (direction) will be present. The movie starts at 8:30.

We raffle with the kind support of WILD BUNCH GERMANY

2 times 2 free tickets for the premiere

If you want to watch the movie on the 19th day of the week, you can do it on the 2nd day of the week.01. before the theatrical release, please send us an e-mail with your name and the subject EIN ATEM to gewinnspiel-ffmtipp@trifels.de

All further information about the film is available at http://www.wildbunch-germany.de/