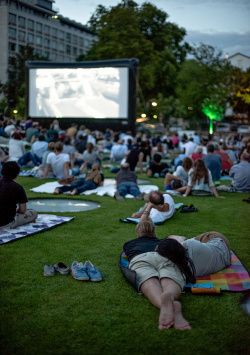 Open-air cinema fans can look forward to the popular summer cinema at Städel Garten again this year. From 13 to 16 July, the green roof of the Städel extension will provide the unique open-air backdrop for a selected and varied film programme. Fitting for the parallel special exhibition "Georg Baselitz. Die Helden" (30 June to 23 October 2016), the fourth edition of Sommerkino is devoted to films telling stories about extraordinary heroes. After nightfall, the first three evenings of free admission will see the documentary "Georg Baselitz" (2013) by Evelyn Schels, Giulio Ricciarellis "Im Labyrinth des Schweigens" (2014) and "Searching for Sugar Man" (2012) by director Malik Bendjelloul. On Saturday, 16 July, there will also be a demonstration for young spectators in the Metzler Hall: The film "Rico, Oskar and the Deep Shadows" (2014) will be shown there already in the afternoon at 15.00 o'clock. Which film will be shown on the last evening, 16 July, can be decided by the audience. The selection includes Sönke Wortmann's "Das Wunder von Bern" (2003), Carol Reed's classic "Der dritte Mann" (1949) and "Der Staat gegen Fritz Bauer" (2015) by Lars Kraume. Votes can be cast on site at the Städel Museum from 27 June to 11 July inclusive by ballot or on Http://facebook.com/staedelmuseum.de

Admission to the summer cinema in the Städel Garden is free on all days. Admission is on each of the evenings from 19.00 o'clock, the film begins in each case with dawn of the darkness. Please bring your own blankets and seats (not chairs). Cold drinks as well as hearty and sweet food before and during the film screenings will be provided. DJ Biffy (Discocaine) already creates a relaxed summer atmosphere before the start of the film. If the weather is bad, the screenings will take place in the Metzler Hall of the Städel Museum.

The summer cinema is part of an initiative by which the Städel Museum opens up its freely accessible garden area for changing installations, performances and events on contemporary art. Already in the course of the new presentation of the sculpture collection in the Städel Garten 2013 and the series "Im Städel Garten", the Städel's exterior space has in the recent past repeatedly become the location for performative and installation works, for example by Adrian Williams ("Watering Hole", 2013), Adolf Luther ("Architektur als Licht und Spiegelung", 2013), Erwin Wurm ("One Minute Sculptures", 2014) or Franz Erhard Walther ("Schreitsockel und Standstellen", 2014). This year the Belgian artist David Claerbout will present a new work in the Städel Garten from 28 September to 6 November 2016.

Summer cinema in the Städel Garden

Georg Baselitz
D 2013, Director: Evelyn Schels, 105 minutes, German version, FSK 0
For the director Evelyn Schels the painter and sculptor Georg Baselitz opened his studios in Germany and Italy for the first time. She followed him to New York, Paris, and Berlin, interviewed his wife and his companions, and in this very private documentary film portrait she traces the artist's most important stages in his life. In addition, the viewer attends the sensitive phases of the creation of paintings and sculptures and gets a very personal impression of Baselitz in the course of the film.

D 2014, Director: Giulio Ricciarelli, 123 minutes, German version, FSK 12
The year 1958 means for Germany in the first place one: Upswing through reconstruction and the economic miracle. Some have never heard of "Auschwitz" - others want to forget it as quickly as possible. Even when a friend of the journalist Thomas Gnielka (André Szymanski) recognizes a teacher as a former Auschwitz supervisor, nothing seems to change at first and nobody is interested in the case - nobody except the young public prosecutor Johann Radmann (Alexander Fehling). Against the will of his superiors, Radmann takes over the case. In his difficult search for enlightenment he encounters a thicket of lies, repression and denial, but is supported by Gnielka and the Attorney General Fritz Bauer (Gert Voss).

S/GB 2012, director: Malik Bendjelloul, 86 minutes, original with subtitles, FSK 0
The folk singer Sixto Rodriquez from Detroit was a star in the 1970s - but not in the USA, but in South Africa and above all without knowing anything about it himself. Far away from his home country, his album "Cold Fact" became the soundtrack of the anti-apartheid movement. Two of his South African fans one day go in search of their idol, who is the subject of numerous rumours, especially about his alleged suicide. In his documentary film, director Malik Bendjelloul tells the incredible story of this musician.

D 2014, Director: Neele Vollmar, 96 minutes, German version, FSK 0
Ten-year-old Rico lives alone with his mother in the Berlin district Kreuzberg. He is a somewhat unusual boy who describes himself as "deeply gifted" and has an eye for "the little things". One day he meets Oskar, two years younger, who is so different from Rico: "highly gifted" and anxious. The two unequal children become friends and join forces to follow in the footsteps of the infamous child abductor "Mister 2000". When Oskar suddenly disappears, Rico has to prove all his courage and tenacity to find his friend on his own.

Das Wunder von Bern
D 2003, director: Sönke Wortmann, 118 minutes, German version, FSK 6
After his service as a soldier in World War II, the miner Richard (Peter Lohmeyer) from Essen was taken prisoner of war by the Soviets. In 1954, after more than twelve years, he finally returned to his family, which had become alien to him and to him. The older son critically questions the role of the father during the Nazi era, the daughter ties up with British occupation soldiers and thus the former enemy, and the eleven-year-old son Mattes (Louis Klamroth), who was born in Richard's absence, has found a role model and a father figure in the national soccer player Helmut Rahn. While the relationship between Richard and his son Mattes gradually improved, Helmut Rahn played an increasingly important role in the team at the Football World Cup and the German team managed to work its way up to the final of the tournament as an outsider.

The Third Man
UK 1949, director: Carol Reed, 104 minutes, German version, FSK 12
The unemployed novelist Holly Martins comes to post-war Vienna, which was divided into sectors by the victorious Allies. The reason for Martin's trip is an invitation from his former school friend Harry Lime, who offered him a job. In Vienna, however, he has to find out that Lime recently died in a strange traffic accident. While Holly Martin listens to friends and acquaintances of the victim, he soon realizes that some of the stories don't fit together and is determined to find out what really happened to Harry Lime.

Der Staat gegen Fritz Bauer
D 2015, directed by Lars Kraume, 105 minutes, German version, FSK 12
In 1957, the young Federal Republic gives the impression of wanting to leave the Nazi era behind. But the committed public prosecutor Fritz Bauer (Burghart Klaußner) does everything in his power to bring the perpetrators to justice in their own country. Twelve years after the end of the war, he receives a decisive indication as to where the former SS-Obersturmbannführer Adolf Eichmann is to hide. Together with the young public prosecutor Karl Angermann (Ronald Zehrfeld) Bauer begins to investigate the background. Meanwhile files suddenly disappear, resistance is formed up to the highest circles and senior public prosecutor Ulrich Kreidler (Sebastian Blomberg) and BKA employee Paul Gebhardt (Jörg Schüttauf) obstruct the investigations of Bauer and Angermann. 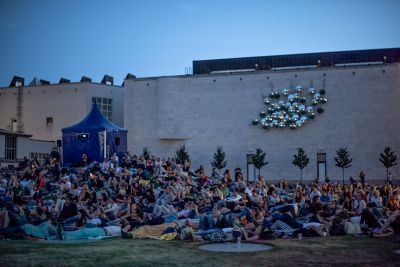