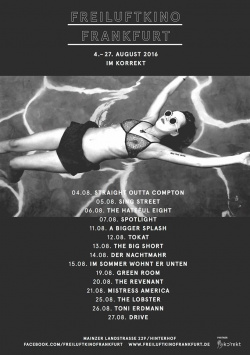 In summer, warm temperatures drive people outdoors. While the theatre houses keep their gates closed during the summer break, the live programme in clubs and concert halls shrinks to a very manageable minimum and cinema operators complain about empty halls, cultural events in many places in the city simply shift to the outside world. There is open-air theatre in Grüneburgpark, music and cabaret at "Stoffel" in Günthersburgpark, the Tangente Festival on the banks of the Main or the Sommerwerft with theatre, music and parties at Weseler Werft. But what Frankfurt has been missing from this colourful summer programme so far is a real open-air cinema. There are smaller open-air festivals and special events, such as the "Shorts at Moonlight" in Höchst or the summer cinema in the garden of the Städel Museum. But those who wanted to experience regular cinema enjoyment under the open sky in the middle of the city centre have so far searched in vain.

This was also noticed by Johanna Süß and Gregor Maria Schubert, the organizers of the LICHTER Filmfestival. And so in 2014 they teamed up with Daniel Brettschneider, the founder of Offenbach's Hafenkino, who is experienced in open-air cinema, to finally donate an open-air cinema to Frankfurt. After two successful summers in the Cantate Hall, the 2016 open-air cinema is moving into Gallus. With its atmospheric backyard, the KORREKT offers the perfect location for the varied cinema programme.

The "Freiluftkino Frankfurt" is again in 2016 a real passion project by film lovers for film lovers. Visitors should primarily be able to enjoy beautiful films in a relaxed atmosphere, but can already meet in the courtyard just one hour before the start of the film with tasty food and refreshing drinks for an atmospheric end to the day. The whole thing will start on August 4th with the hit movie "Straight outta Compton", accompanied by a block party with DJ Double D.

The program selection is pleasantly versatile, so that really everyone will find a movie for their personal taste. Regardless of whether you prefer artistic programme cinema fare ("The Lobster"), comedies or dramas, with the 15 selected films everyone really gets their money's worth. Tarantino's "The Hateful 8", the bloody horror thriller "Green Room" with Patrick Stewart and Anton Yelchin, who unfortunately died far too early, as well as the arthouse darling "Toni Erdmann" are on the program as well as the Oscar winners "The Big Short" and "The Revenant". Our secret tip is "Sing Street", a wonderful homage to the 80s, which will be shown on 05.08..

As a special treat for all cineasts, all non-German-language films will be shown in  the original version with German subtitles!

All important information in brief:

No advance booking & no reservations possible

There are tasty meals & drinks

In case of persistent rain the performance has to be cancelled

You will find all current information: www.facebook.com/freiluftkinofrankfurt

You can also find the program under: http://www.freiluftkinofrankfurt.de