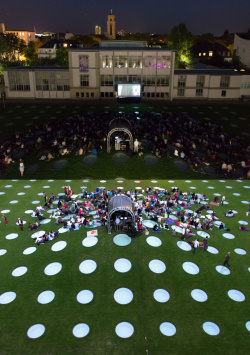 After the great success in previous years, the summer cinema in the Städel Garten will take place from the 15th to the 19th of November. The green roof of the Städel extension building once again offers the right atmosphere for a varied film programme under the open sky. On four evenings, in preparation for the next special exhibition of the Städel Museum, "Die 80er. Figurative Painting in Germany" (22 July to 18 October 2015), that decade will be revived on film. During the first three evenings of the free event, Wim Wenders' "Der Himmel über Berlin" (1987), "Basquiat" (1996) by Julian Schnabel and the current production "Tod den Hippies! Long live punk" (2015) by Oskar Roehler can be seen on big screen. Wim Wenders' film classic "Der Himmel über Berlin" accompanies an angel in West Berlin of the 1980s who has become tired of the mere distanced observation of people and wants to become human himself. "Basquiat" tells the story of the steep ascent and deep fall of the young artist Jean-Michel Basquiat (1960-1988), who was discovered by Andy Warhol in New York in the 80s. In "Death to the Hippies!! Long live punk", 19-year-old Robert escapes his narrow provincial life at the beginning of the 1980s to immerse himself in the West Berlin punk scene.

This year again there will be a special screening for the young audience: on Saturday, 18 July, a classic children's film from the 1980s will be shown in the Metzler Hall (for children aged six and over). Unlike the other films, it does not begin at nightfall, but at 3 p.m. in the afternoon.

The decision as to which film will be shown on 18 July, the last evening of the summer cinema, is again in the hands of the audience. You can choose between Alan Parkers

Entrance to the summer cinema in the Städel Garden is free on all days. Admission is on each of the evenings from 19.00 o'clock, the film begins at dawn of darkness. Please bring your own blankets (not chairs) as seating. IMA Catering provides for the physical well-being before and during the film screenings with hearty and sweet dishes as well as drinks. DJ Biffy (Discocaine) provides the musical background before the film. If the weather is bad, the screenings will take place in the Metzler Hall of the Städel Museum.

The summer cinema is part of an initiative by which the Städel Museum opens up its freely accessible garden area for changing installations, performances and events on contemporary art. Already in the course of the new presentation of the sculpture collection in the Städel Garten 2013 as well as the series "Im Städel Garten", the Städel's exterior space has recently repeatedly become the venue for performative and installation works, most recently by Adrian Williams ("Watering Hole", 2013), Adolf Luther ("Architektur als Licht und Spiegelung", 2013), Erwin Wurm ("One Minute Sculptures", 2014) or Franz Erhard Walther ("Schreitsockel und Standstellen", 2014).

Wednesday, 15. July, admission 19.00 o'clock, movie starts at nightfall
The sky over Berlin
BRD/FR 1987, director: Wim Wenders, 128 minutes, German version, FSK 6
The sky over Wim Wenders' war-ravaged, divided Berlin is full of gentle angels in trench coats listening to the tortured thoughts of mortals and trying to comfort them. They are only visible for each other and for children. One of them, Damiel (Bruno Ganz), falls in love with the trapeze artist Marion (Solveig Dommartin), a mortal, and decides to give up his eternal life for her. Peter Falk (as himself) helps with the transition by explaining the simple happiness of human experiences.

Thursday, 16 July, admission 19.00 o'clock, movie start at nightfall
Basquiat
USA 1996, director: Julian Schnabel, 108 minutes, German version, FSK 12
Jean-Michel Basquiat (Jeffrey Wright) lives as a young "graffiti kid" on the street in New York in the early 80s. At the age of 19, he was discovered by Andy Warhol (David Bowie), which marked the beginning of his meteoric rise to become the celebrated star painter. But the success and basquiats of excessive alcohol and drug consumption soon take their toll.

Friday, 17 July, admission 19.00, film start at nightfall
Death to the hippies! Long live punk
D 2015, director: Oskar Roehler, 104 minutes, German version, FSK 16
In the West German province the hippies are in power in the early 80s. That's why Robert (Tom Schilling) has to get out of there, and there's only one city for him that comes into question thanks to its promises of sex, drugs and punk: West Berlin. His old buddy Schwarz (Wilson Gonzalez Ochsenknecht) welcomes him there with open arms, because he needs a girl for everything in his peep show, and Robert will. At work Robert meets Sanja (Emilia Schüle). Days and nights become blurred, Robert lets himself drift and becomes a regular guest in the legendary "Risiko", the place where time doesn't exist, where icons like Blixa Bargeld and Nick Cave hang around and everything seems possible. By means of a lavish Berlin allowance and a small assault, Robert plans a completely new source of income together with Schwarz and with Sanja the not exactly typical solution to family problems.

Fame
USA 1980, director: Alan Parker, 134 minutes, German version, FSK 12
The entrance exams take place at the New York University of the Performing Arts. Among those recorded are singer Coco (Irene Cara), homosexual actor Montgomery (Paul McCrane), actress Doris (Maureen Teefy) and dancer Leroy (Gene Anthony Ray). They all come from the lower class and dream of a great career in showbiz after four years of study. During this time, however, they also have to deal with all kinds of everyday problems, and only a few make the breakthrough in the end.

Flashdance
USA 1983, director: Adrian Lyne, 95 minutes, German version, FSK 12
In Pittsburgh, 18-year-old Alex (Jennifer Beals) works as a welder in a steel mill during the day, while she dances in a club in the evening. But actually she would like to make a career in a dance company and in return to the conservatory in order to receive a classical ballet education. She falls in love with her boss (Nick Hurley), who gives her an audition behind her back through relationships.

Footloose
USA 1984, director: Herbert Ross, 107 minutes, German version, FSK 12
The music- and dance-loving teenager Ren (Kevin Bacon) moves with his mother from Chicago to a small town in the Midwest. There he experiences a real culture shock, because rock music and public dancing are forbidden by law. He falls in love with Ariel (Lori Singer), the daughter of the local priest who condemns rock music as the devil's work. After Ren has passed a test of courage, he succeeds in persuading other youths to perform a public dance event.

Summer cinema in the Städel Garten