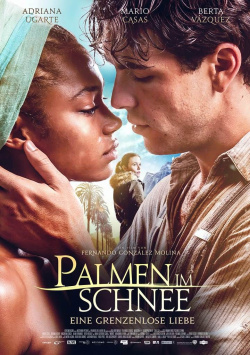 The touching romantic highlight from Spain PALMEN IM SCHNEE is now being shown on the big screen: On Monday, June 27, special screenings will take place nationwide in all UCI cinema worlds and selected CineStar cinemas.

The individual cities and further information on the screenings can be found under: Www.facebook.com/PalmenImSchnee

Only an eternal love wins over forgetting...

The brothers Kilian and Jacobo leave their home Spain in 1953 to find their happiness in distant, tropical Africa. In this sensual, evergreen paradise, Kilian not only loses his heart to the land: he falls in love with Bisila, a local. It is the beginning of a forbidden love in times of political unrest and social upheaval. A love whose strength can still be felt decades later. Because when Jacobo's daughter Clarence travels to Africa after her father's death to investigate her family's past, she finally finds the answers she has been searching for so long ...

PALMEN IM SCHNEE - EINE GRENZENLOSE LIEBE is Spain's most lavish and expensive film production of recent years and carries off into a breathtakingly exotic world with grandiose images. In the leading roles the dream couple of the Spanish cinema can be seen: Mario Casas ("Three meters above the sky") and Adriana Ugarte (soon in Pedro Almodóvars "Julieta"). Director Fernando González Molina already attracted more than 1 million visitors to the cinemas with his first films "Brain Drain", "Drei Meter über dem Himmel" and "Ich steh auf Dich" - all starring Mario Casas. With PALMEN IM SCHNEE he continues his series of successes: the romantic drama replaced STAR WARS as number 1 on the Spanish cinema charts at the end of 2015 and has already been seen by over 2.5 million viewers.

Ab 15. July 2016 the film will also be released in the Mediabook, on Blu-ray and DVD and as Video on Demand