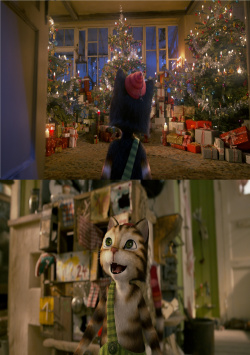 Petterson and Findus - A cat comes to life in Frankfurt

In less than a year the second PETTERSON AND FINDUS film entitled THE BEAUTIFULEST CHRISTMAS will be released in our cinemas. The shooting already took place in February 2015 and lasted almost two months. Now an important part of the production has moved to Frankfurt. At the CHIMNEY animation studio on Hanauer Landstrasse, more than twenty employees are working to bring the endearing Findus to life. And also at the small Mucklas and the snow-covered Christmas winter landscape is tinkered here. Almost a year before the release, we visited CHIMNEY together with "Pettersson - Darsteller" Stefan Kurt, scriptwriter Thomas Springer, the producer team of the film, and Minister of State Boris Rhein of the Ministry of Economics and the Arts of Hesse to have a look over the shoulder of the specialist.

Before explaining the individual steps that are necessary to integrate Findus into the film in such a way that you have the feeling that he really was on set with Stefan Kurt, the actor first told what it was like to play alone most of the time and often only have to interact with a small blue bag or a cardboard finder. Kurt, who shot the great multi-part "Der Schattenmann" in Frankfurt for several months in the 1990s, was so enthusiastic about the lovingly designed set alone, which captured the charm of the book as well as the adaptation by screenwriter Springer, that he would like to be in front of the camera as Petterson again for the third and last part. The first excerpts, which were shown to the press, also show that the actor obviously had fun shooting.

The following tour through CHIMNEY showed very impressively how much effort has to be invested in the creation of a three-dimensional animated computer figure, but also in the creation of landscape or virtual snow. A challenge that the CHIMNEY team has mastered with flying colours, as the individual presentations by some employees have shown.

Since Frankfurt plays such a central role in the making of the film, it was once again a matter of course for the State of Hesse to support production with funds in the second part as well. The fact that these are well invested is shown not only by the great success of the first part, which was a great cinema success not only in Germany, but also in Austria and the Scandinavian countries, and which is now also sold very well on DVD and Blu-ray.

The visit to CHIMNEY not only gave a good insight into the development of cinema magic for young and old viewers. He also showed one of Frankfurt's many creative sides. If you want to get an idea of the work of the animation studio, you can watch the first PETTERSON UND FINDUS film on ZDF at noon on 24.12.2015 or of course go to the cinema from November 2016, when you can see the BEAUTIFULEST CHRISTMAS EVER EVER.

More information on the PETTERSON UND FINDUS film can be found at: Http://www.pettersson-und-findus-derfilm.de/#/home

More information about CHIMNEY can be found at: http://www.chimneygroup.com/