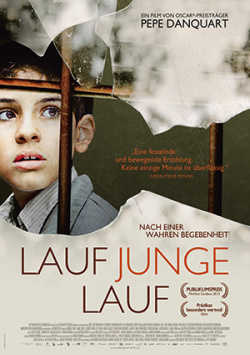 Premiere of the movie LAUF JUNGE LAUF in Frankfurt

>in Harmonie Kino in Frankfurt

The planned course of the evening:

20:30 Welcome of the guests in the cinema, greeting of Minister of State Boris Rhein and start of the film

ca. 22:25 Uhr The film ends and the film team is presented on stage

Srulik (Andrzej and Kamil Tkacz) is almost nine years old when he manages to escape from the Warsaw Ghetto just in time. To escape the German soldiers, he flees to the vast, impassable Kampinoski forest and has to learn what it's like to survive on your own in the wilderness. How to sleep on trees, hunt small animals and feed on berries. Driven by an unshakeable survival instinct, he survives the first months of his escape. But the icy cold of winter and the unbearable loneliness drive the boy back to civilization.

How can he recognize who he can trust and who he can't trust? Few people are willing to risk their lives for a little strange boy who could be a Jew. Only when one day he knocks on the door of the single farmer's wife Magda Janczyk (Elisabeth Duda), whose husband and sons have joined the partisans, does Srulik learn the most important and painful lesson to survive: Magda teaches him to deny his religion and with it his identity and from then on to make a living as a Catholic orphan Jurek. On his three-year odyssey through occupied Poland, fear of discovery remains his constant companion. He meets people who help him, but also those who betray him. Only by merging more and more with his false identity and increasingly suppressing his true origins does Srulik succeed in the impossible: surviving the madness of this time.

Pepe Danquart (Am Limit, Helltour) stages the deeply moving story based on true events as an ode to life and humanity. The film is a monument to all the children who are still struggling to survive in many parts of the world today and who are forced to grow beyond themselves.

LAUF JUNGE LAUF tells the incredible life story of Yoram Fridman, who made Uri Orlev world-famous with his bestselling novel of the same name. A story that teaches that reality sometimes surpasses every fantasy.

The French-Polish Elisabeth Duda shines on the side of the Drama Discoveries and Twin Brothers Andrzej and Kamil Tkacz as Srulik/Jurek. Other roles are played by Jeanette Hain (Poll), Rainer Bock (Das weisse Band) and Itay Tiran (Lebanon). The screenplay was written by Heinrich Hadding (Die Päpstin) in cooperation with Pepe Danquart.

"LAUF JUNGE LAUF is an impressive film full of strength and hope about the victory of humanity over the inhuman horrors of the Nazi era. ... A respectful bow to all the people who helped the persecuted during the time of the war, regardless of the consequences they themselves had to reckon with." (FBW statement)

Further information about the film at: http://laufjungelauf-derfilm.de/