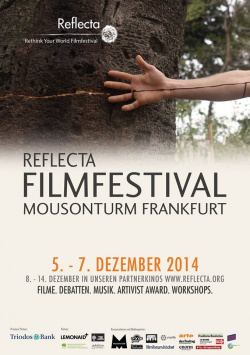 For the first time, the international Reflecta Film Festival at Mousonturm will be the main venue. Outstanding documentary films tell of people and projects that search with subversive curiosity for alternative lifestyles in our society. How do we want to live? What does it mean to act responsibly: economically sensible, ecologically compatible and socially just? Discussions between artists, experts, activists and guests expand the film programme, as do interactive exhibitions, city walks, workshops, readings, performances and concerts. The restaurant in the Mousonturm provides for physical well-being with ecological, regional, fair and vegetarian vegan food and drinks.

The main films of the festival focus on socio-politically relevant topics such as the financial crisis, the limits of economic growth, strategies for more sustainable consumption, urban gardening as well as considerations for a fair and social shaping of the modern working world. While globalized acceleration seems to have us all firmly under control, more and more people all over the world are escaping the uncontrolled state of permanent time pressure: Philippe Borrels Schluss mit schnell (FR 2014, 85 Min.) is an ode to self-determined life. In their Oscar-nominated film Encounters at the End of the World (US 2007, 99 Min., OmU), Werner Herzog and his cameraman Peter Zeitlinger fought their way through the Antarctic in search of people who had consciously decided to live and work in extreme states of emergency. One of Germany's formerly leading investment bankers unpacks in Marc Bauer's film Master of the Universe (DE 2013, 88 Min., OF), which is nominated for the German Film Award 2014. It tells of the abysses and unscrupulousness of the glamorous financial world and reveals the breathtaking psychogram of an industry and its players. No less thrilling, Work Hard Play Hard by Carmen Losmann (DE 2011, 90 Min., OF) is the heel of a self-optimized high-tech workforce that passionately and highly mobilely turns its work into life. Everyone wants more time, but even though we constantly save time, we end up with less and less of it. Florian Opitz asks in Speed - In Search of Lost Time (DE 2012, 97 Min., OF) what drives this acceleration: electronic means of communication or just our bad time management?

The Reflecta Artivist Award will be presented to short films that move and initiate change at the festival on December 6. The award aims to promote the commitment of artists to a more environmentally friendly and social world.