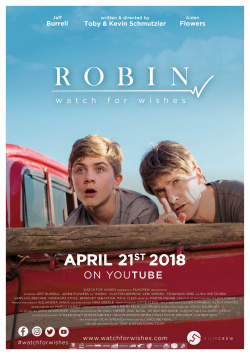 ROBIN - Watching a feature film for a good cause

Watching an exciting and moving film for free on YouTube and doing something for a good cause with it - you can do that for a total of four weeks since April 21st. The feature film ROBIN, the heart of the social fundraising campaign "Watch for Wishes", will be shown free of charge for that long. For every click the film gets online, the campaign partners donate 10 cents to a charity institution. In the end, enough money should be raised to fulfil the wishes of sick and disadvantaged children.

The makers of ROBIN were inspired by true events. It tells the story of the author John, who would do anything for his seriously ill son. When he discovers the boy's secret bucket list, he makes a drastic decision: he sneaks out of the hospital with Robin to experience a father-son adventure in South Africa. Of course, this doesn't remain without consequences, because while John tries to fulfill his son's greatest wishes, he is wanted for child abduction.

For four years the film was worked on - always in an effort to keep the costs as low as possible. Various companies have provided services and sponsorship. Locations could be used free of charge and the cast and the entire crew waived any pay. This allowed the makers to shoot a feature film, which would normally have cost several million euros, for a fraction of the usual budget. The film was shot in Germany and South Africa with an international cast.

The aim of the makers: With the very emotional medium of film, they not only want to entertain, but also to have a social effect. Not only by the fact that the viewers make a difference in real life by watching it. They want to inspire people with the story of their film and also show that even a small contribution can make a difference. With a lot of passion and a firm belief in the ambitious project, a film was created that moves, entertains well and yet is much more than "just" a film. Therefore we can only recommend you: Take a good look at this work. (The film was shot in English. German subtitles are available on YouTube)

Besides the possibility to watch ROBIN on YouTube, there are also two screenings in Frankfurt, where some of the filmmakers will also be present. It also offers a look behind the scenes of the ambitious project. The first screening will take place on May 7th at Campus Bockenheim, organized by MainLichtblick e.V. (Infos dazu HIER). One day later, on May 8th, the film will be shown at Design Offices Frankfurt Westendcarree (Infos HERE).

Kino Trailer zum Film "ROBIN - Watching a feature film for a good cause "
Loading the player ...