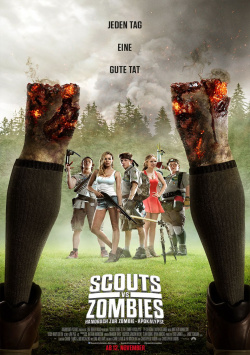 Scouts vs. Zombies - First trailer for the zombie comedy

Any rental from Paramount Pictures Germany

If on 12 November the apocalypse of the undead breaks out in German cinemas: You can leave your head on. The three adorable scouts will save you in the wicked zombie fun SCOUTS VS. ZOMBIES - ZOMBIE APOKALYPSE MANUAL with their survival tips, true to the motto: A good deed every day!

"Every day a good deed!"is the motto of the young Augie (Joey Morgan), who can't imagine anything more beautiful than to put one boy scout badge after the other on the gap with his two best friends. But Carter (Logan Miller) and Ben (Tye Sheridan) have had enough of campfires, latrines and canned beans. As a teenager you should finally give in to your raging hormones and not stumble around in the undergrowth as a disguised loser. When the two of them secretly sneak away to go to the city's hottest party, they meet real carnal lust in an abandoned strip club: all the inhabitants of the city have been turned into zombies! Together with the handgun-trained barmaid Denise (Sarah Dumont), the three scouts set off on a bloody hunt through the small town and prove that they are no pussies even in the face of Britney Spears loving zombies and mutated killer cats.

What you should do best in case of an attack by mutated cuddly kittens and strippers, the mad trailer shows you!

You will find the official film page at: www.ScoutsVsZombies.de