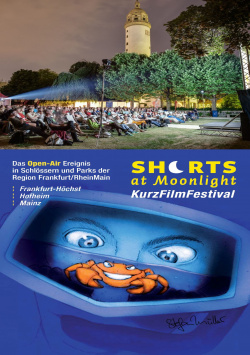 Expansion of the festival programme to 25 film evenings

Additional dates in Mainz and Frankfurt-Höchst

It is much more difficult to tell interesting, exciting and original stories in just a few minutes than one might imagine. It is all the more astonishing how many successful, surprising and fascinating short films are made year after year. And now, for the eleventh time, the short film festival "Shorts at Moonlight" offers an extensive platform for these "Shorts" with steadily increasing viewer interest. Numerous national short films will be presented to visitors at selected locations in the Rhine-Main region from 16 July to 17 August, with special attention being paid to filmmakers from the region. The atmospheric venues include Höchster Schloss in Frankfurt, Alte Wasserschloss in Hofheim and Kurfürstliche Schloss in Mainz:

Preparations for this year's festival are already in full swing. The opening event at Höchster Schloss will take place on 16 July 2014. Due to the great response last year, the programme was extended to a total of 25 film evenings. There are five additional dates in Mainz and another screening in Frankfurt-Höchst.

Also this year the audience can vote for their favourite films, which will be shown as "The Best" on the last evening in Höchst, Hofheim and Mainz. At the end of the festival, Shorts at Moonlight will show the most popular films of the entire programme as well as the film favourites of past years ("Evergreens") in the fifth programme block in Mainz.

Admission starts at 19:30, the film screenings start at nightfall.

Shorts at Moonlight, Germany's most popular open air short film festival, has been attracting short film fans to the Rhine-Main region for 12 years.

The festival pass still costs 20 Euro and entitles the holder to admission on all days, the day ticket is available for eight Euro. If you want to be on the safe side and don't want to hear "sold out" at the box office, you can already secure your festival pass at www.kurzfilmfestival.de.


About Shorts at Moonlight e.V.: