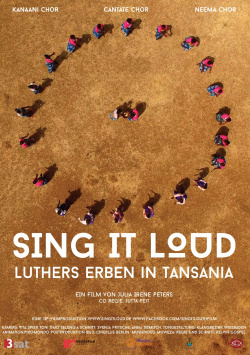 ]"Sing it Loud - Luther's heirs in Tanzania" is an electrifying music documentary filmed in the beautiful landscape of Tanzania, in remote villages and the vibrant metropolis of Arusha. Choral music is pop music there, provides social cohesion among people and offers personal development. On the occasion of a choir competition, all choirs must perform their own compositions and sing an old German chorale. Three choirs begin with rehearsals…

The music film SING IT LOUD - LUTHERS ERBEN IN TANSANIA takes the audience on an emotional journey and tells of music, faith and joie de vivre. A thrilling visual and acoustic festival, with impressive pictures of the Tanzanian landscape, touching family stories and surprising insights into Tanzanian life.

Official release of the film is on May 18, 2017 at the distribution of JIP Filmproduktion.

The music documentary film SING IT LOUD - LUTHERS ERBEN IN TANSANIA by Frankfurt director Julia Irene Peters will have its premiere at Cinema Frankfurt.

Absent will be director Julia Irene Peters, co-director Jutta Feit, the crew and the Tanzanian Kanaani Youth Choir, which will be portrayed in the film. After the performance the choir will present some pieces of its modern African gospel music a capella. Dr. Ursula Schoen, Vice-Dean of the Protestant Church in Frankfurt and the Working Community of Christian Churches, will also be present as guest speaker.