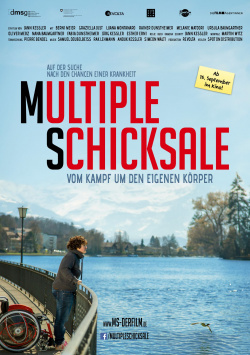 The moving documentary MULTIPLE SCHICKSALE - Vom Kampf um den eigenen Körper will be shown on September 16, 2016 in Frankfurt in a special screening.

Director Jann Kessler presents his film together with Monika Dettke from DMSG Hessen and DMSG Hessen ;Jan Gramm, board member of the Deutsche Gesellschaft für Palliativmedizin, vor und is available after the film for an audience discussion + expert discussion in the cinema.

"With considerable visual sensitivity...one of the most amazing Swiss debut works of the last years" - Neue Zürcher Zeitung

For years Janns mother suffers from MS - multiple sclerosis. When he wants to know more about her disease, she can't speak anymore. In the hope of learning more, the then 18-year-old filmmaker embarks on a journey across Switzerland and meets other people living with MS: He meets Bernadette, who is still laughing, although sometimes she doesn't feel like it. Luana, who has encouraging words tattooed on her arm. He meets Melanie, who is building a verbose protective wall around herself. Oliver,  who must divide his forces in the everyday life purposefully. Graziella, who's trying to maintain normalcy. Many of the protagonists speak very openly about their lives, which they can enjoy again and again despite all the restrictions and live very intensely.

In Switzerland, MULTIPLE SCHICKSALE - Vom Kampf um den eigenen Körper was a surprise success, it ran there very successfully in the cinemas. The film attracted a lot of attention nationwide for the previously incurable disease, which affects more than 200,000 people in Germany. A multilayered film, which does not retreat from the difficult questions as much as from the beautiful moments of life.