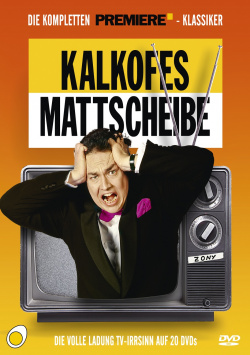 Special: The big story of the TV screen on CD and DVD

Just in time for the TV launch of the new season of Kalkofes TV screens - Rekalked! on Tele 5 - always Fridays, 20.00 o'clock, - presents turbine Classics starting from the 12 October for the first time all Radiomattscheiben on 16 CDs in a box !

We write the year 3 before Kalkofes Mattscheibe on premiere. In 1991, Oliver Kalkofe's television satire format, which would later become a fixture on German TV, was produced on radio ffn - almost by accident. But how did it all begin... back then on 25.02.1991 with an innocent review of the "Lindenstraße" from the day before? The CD edition "Kalkofes Radiomattscheibe" on a total of eight double CDs reveals this secret and much more.

This complete edition contains more than 170 radio mat discs that were broadcast between 1991 and 2009, countless bonus material - including interviews (with David Hasselhoff, among others), extensive booklets with broadcast dates and personal memories by Oliver Kalkofe, the best listener campaigns and much more.

Also Turbine Classics will release on 12th October KALKOFES MATCH DISC - DIE KOMPLETTEN PREMIERE-KLASSIKER in a curious brilliant box with 20 DVDs, all episodes and all specials!

On April 17, 1994 the first show "Kalkofes Mattscheibe" flickered on the German screens. Previously tested on the radio, Oliver Kalkofe now ventured into the unencrypted

evening program of the pay-TV channel Premiere. Overnight, the show achieves (undreamt-of but deserved) fame. Oliver Kalkofe quite rightly received the Adolf Grimme Prize for his "Mattscheibe" in March 1996. In more than 130 episodes and several special broadcasts, Kalkofe took on the icons of supposedly tasteful television entertainment until the end of 1998: From teleshopping to folk music and hits to daily talk shows. Star chef Johann Lafer serves bread rolls with Hackepeter, Achim Mentzel lets the Spreewald cucumber out in his hit parade, the Kelly Family tear their vocal chords, Bärbel tempts you into delirium, Fips ass muscle philosophises about prostate tattoos, untalented children become talentless in the "Mini Playback Show". Erich von Däniken follows in the footsteps of the idiots, Roberto Blanco advertises detergents, Kalk-Man reads Coupé, the magazine for handiwork with high standards, parties register for election and Home Order Television, HOT for short, becomes "Source Catalogue - The Movie". 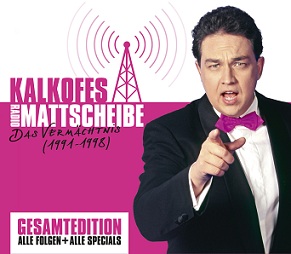 listener actions, "The wrath of the fat", "ABC-TV" and interviews

as guest at the "Kalk und Brink Show" and Achim Mentzel on "Achim seine Mattscheibe".

- Behind the scenes of the preload turn

- 100 years of the Matt Wheel - the legendary 100th anniversary of the "New Year's Eve". Broadcast

You can order this DVD-Box HERE

In KALKOFES MATTSCHEIBE Oliver Kalkofe parodies and comments on current TV sins. The programme started in 1994 and ran on the pay-TV channel Premiere until 1998. After a short trip to ARD, where Kalkofe picked up DIE WUNDERBARE WELT DES SPORTS, he switched to ProSieben, where he was shown in four new seasons until 2008. KALKOFES MATTSCHEIBE was awarded the Adolf-Grimme Prize and the German Comedy Prize.

Oliver Kalkofe was born in 1965 in Hannover and grew up in Peine. After studying journalism, English and German in Münster, the trained foreign-language correspondent attracted attention for the first time as a comedian with his disrespectful, biting humour on the Sunday cult show "Frühstyxradio" of the Lower Saxony radio station ffn. With the award-winning TV satire "Kalkofes Mattscheibe" he became one of the best-known and most popular comedians and Germany's sharpest media critic. The programme was awarded the renowned Grimme Prize in 1996 and the German Comedy Prize in 1999. He conquered the cinema as co-author and co-producer with the Edgar Wallace parodies DER WIXXER (2004) and NEUES VOM WIXXER (2007), in which he also played one of the leading roles. Furthermore, Oliver Kalkofe is an experienced and popular dubbing artist: He was the German voice of the voracious tomcat "Garfield" in GARFIELD 2 (2006) and spoke, among other things, main characters in the computer animated movies ROBOTS (2005), URMEL VOLL IN FAHRT (2008), MONSTERS VS. ALIENS (2009) and MEGAMIND (2010). For the German version of the TV series "Little Britain" and "Come Fly With Me" he was active as a dubbing artist and author for the dubbing book. He also regularly writes the media-critical column KALKOFES LETZTE WORTE for the TV program guide Spielfilm, which is presented weekly on Radio Eins in Berlin.

KALKWATCH! Spectators as media police - join in! Report TV trash, KALKOFE disposes of the trash in his show. Your disposal station for TV waste: http://www.kalkwatch.de/

More information about Oliver Kalkofe on the Internet at..: http://www.kalkofe.de/ and www.facebook.com/kalkofe