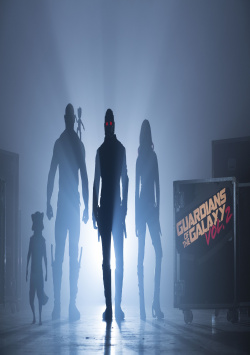 Start shooting for GUARDIANS OF THE GALAXY VOL. 2]

Director and Screenplay.] James Gunn
With Chris Pratt, Zoe Saldana, Dave Bautista,
Michael Rooker, Karen Gillan and Sean Gunn
as well as in the original with the voices of Vin Diesel as Groot
and Bradley Cooper as Rocket Raccoon

At Pinewood Studios in Atlanta, Georgia the shooting of GUARDIANS OF THE GALAXY VOL. 2 started. The continuation of the worldwide cult success of 2014 will start on 27 April 2017 in German cinemas.

In front of the acoustic background of a brand-new "Awesome Mix Vol. 2" the wackiest heroes of the galaxy now set off on new adventures, while they have to reveal the secret of Peter Quill's true origin.

The predecessor "Guardians of the Galaxy" inspired critics and viewers around the globe two years ago and flushed a total of over 770 million dollars into the coffers, making it the most successful debut film in the Marvel Cinematic Universe. The film's soundtrack - Peter Quill's Awesome Mix Vol. 1, featuring David Bowie, Jackson 5 and 10cc - was awarded platinum and nominated for a Grammy® award.