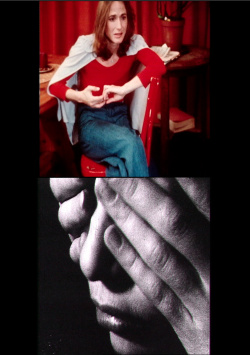 Eleven films of the US-American experimental filmmaker from the 4th to the 6th week of his career March 2016 at the Deutsches Filmmuseum, Frankfurt am Main

The film collective Frankfurt dedicates its exhibition from 4 to 4 March 2016 to the American filmmaker Stephen Dwoskin. until 6 March 2016. A total of eleven works by the experimental filmmaker, who died in 2012, will be shown in six screenings at the cinema of the German Film Museum in Frankfurt am Main. Dwoskin, who already fell ill with polio at the age of nine, had to struggle with physical impairments throughout his life and processed his pain in strongly self-referential films. In an idiosyncratic film language he describes the complex intimate relationships to his partners and uses the camera as a medium for communication between subject and object, viewer and filmmaker. Dwoskin's physical cinema, with its haunting expression of sexuality, pain and fear, is regarded as an indispensable building block in the history of avant-garde film. Dwoskin, who initially enriched the New York art scene with Andy Warhol and moved to London in the mid-1960s to gain a foothold as a founding member of the London Film-makers' Co-op, created over fifty films in his career. The Filmkollektiv Frankfurt shows a selection of his early works from the 1960s and 1970s, when he was still working with 16mm film material, as well as some digitally produced works from the 2000s. On the occasion of the founding of the London Film-makers' Co-op 50 years ago, the retrospective opens on March 4 (8.15 p.m.) with classics of structuralist film.

The actress Beatrice Schönherr, the restorer William Fowler (British Film Institute) and the estate administrator Rachel Garfield (University of Reading) will travel to Frankfurt am Main to present selected screenings.

The event is supported with funds from the Hessian Film Fund and the Cultural Office of the City of Frankfurt. Cooperation partners are the German Film Institute - DIF and the experimental film archive LUX. Supporter is Novum Group Hotels.