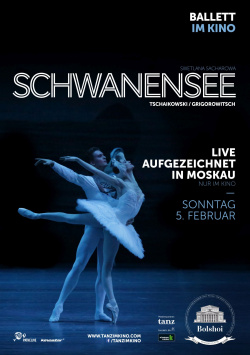 Swan Lake at the Cinema

On Sunday, 05. February 2017 many cinemas in Germany show SCHWANENSEE, danced by the Bolshoi Ballet in Moscow.

At moonlight on the shore of a mysterious lake Prince Siegfried meets the enchanted swan woman Odette. Totally enchanted by her beauty, he swears his allegiance to her. Far too late he notices that fate has completely different plans for him…

The ballet of ultimate beauty, with music of incomparable perfection, was born in 1877 on the Bolshoi. In the double role of the white swan Odette and her rival the black swan Odile, the prima ballerina Svetlana Sakharova exudes vulnerability and cunning through a first-class technical masterpiece. Besides the powerful and emotional Siegfried, Denis Rodkin. Accompanied by breathtaking scenes with the ensemble of the Bolshoi this is a classical ballet of the very finest.

This season, too, the ballets were recorded especially for the big screen, filmed with over ten cameras in HD and 5.1 sound. Thus the Bolshoi broadcasts offer the audience the unique opportunity to be closer to the dancers than ever before. Bonus material, in the form of interviews with dancers and choreographers as well as a backstage tour, also gives it an exclusive look behind the scenes of the world's most renowned ballet company, giving it a special added value.

The upcoming dates are: