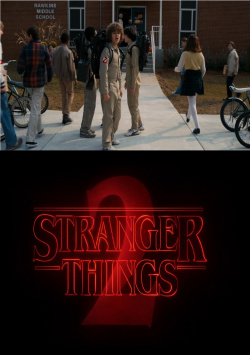 Teaser for the 2nd season of STRANGER THINGS released

With the series STRANGER THINGS streaming provider NETFLIX has released last year THE surprise success par excellence. The Mystery series pressed exactly the right nostalgia buttons for the fans. The story of a group of boys in the 1980s who have to free their friend Will from the clutches of a supernatural creature is infused with the flair of old Spielberg movies, spiced with a touch of Stephen King and "X-Files". Whoever liked "The Goonies", "E.T.", "Starman" or "Stand by me" can only love "Stranger Things". The team behind the Duffer brothers Matt and Ross did a great job getting the 80s back without seeming dusty or a clumsy copy. The series is an exciting, entertaining and also original homage, with many beautiful allusions, a few good shock effects as well as a lot of charm and heart. And that goes down well with the audience.

After the great success of the first season, the Duffers will release the second season in time for Halloween 2017, which will play one year after the rescue of Wills. The first teaser that has now been released is a great one. Besides the MARVEL series "Jessica Jones", "Daredevil" and "Luke Cage", as well as pearls like "Narcos" or "Orange is the new Black", "Stranger Things" is without question one of the best arguments for subscribing to NETFLIX. The only drawback is that it'll be damn long before October. But you can also see it positively: There is enough time to see the first season a few more times and listen to the cool retro soundtrack up and down.

You can also find more information on Facebook: Https://www.facebook.com/StrangerThingsTV