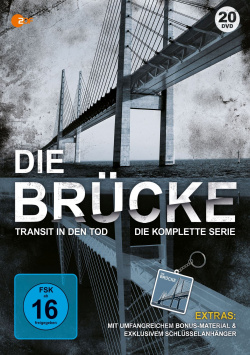 The bridge appears as a complete edition with all four seasons

The Swedish-Danish crime series Die Brücke - Transit in den Tod (original title: Danish Broen, Swedish Bron) was a huge success worldwide over four seasons, celebrated by critics and audiences alike. There were remakes in many countries, but nobody could get close to the original. The four seasons of Die Brücke ran worldwide with sensational success (the series was sold in more than 200 countries!), and also in Germany millions of TV viewers watched the outstanding multi-part series spellbound.

Our detailed discussions can be found here:

Scandinavian crime novels and thriller series have enjoyed enormous popularity for many years, which is often due to the exciting scripts, convincing actors and the high quality of the film and TV productions. So why did Die Brücke take the audience by storm, and what is the extraordinary fascination of this series? First of all, it is the ingenious basic idea to conduct the investigations for the entire series at the border of two countries, which leads to cooperation between the respective police units responsible - with all their communication difficulties, the different ways of working and the resulting problems.

The successful mixture of crime thriller, political thriller and social drama always incorporates current socially relevant topics such as climate catastrophe, environmental destruction, domestic violence, xenophobia, homophobia or hate speech on the Internet. The challenging and versatile scripts have been staged perfectly and incredibly grippingly and offer lasting suspense from the first to the last minute. But the highlight should be the brilliantly acting actors, above all the Swedish actress Sofia Helin, who with Saga Norén, a policewoman with psycho-social difficulties, obviously embodies the role of her life. Their Danish colleagues Kim Bodnia and Thure Lindhardt as investigators Martin Rohde and Henrik Sabroe form emotional antitheses to Saga's harsh nature and apparent lack of emotion. The initial mutual incomprehension and later growing together of Saga and her partners make up the inimitable attraction of these constellations and form a new and special variant of the classical investigator duo.

Although The Bridge constantly demands the highest attention from the viewer and you often have to leave your comfort zone because of the sometimes drastic performances and uncomfortable mood, the series creates a tremendous pulling power and thus remains in your memory for a long time.

The bridge did not invent the genre "Nordic Noir", but it has perfected it!

Now Edel Motion presents on October 11, 2019 on 11 BDs resp. 18 DVDs for the first time all cases in a complete edition as a high-quality collector's item in two digipacs together with the bonus DVD 1: Behind the Scenes of Die Brücke with extensive, exciting insights into the creation of the series and bonus DVD 2: Nordic Noir - The Success Story of Scandinavian Series, a one-hour documentary about the Nordic Noir genre. The high-quality box is completed by the Öresund bridge as a key ring and a booklet with interesting facts about the series...

You can order the box HERE

Kino Trailer zum Film "The bridge appears as a complete edition with all four seasons "
Loading the player ...