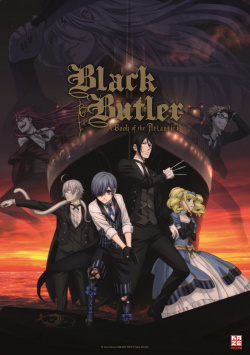 The Japanese blockbuster celebrates its premiere as part of the Anime Night and will be shown in its dubbed version for the first time.

The Campania, a luxurious transatlantic liner, anchors in the port of London and is expected to make its maiden voyage to New York with great cheers. Ciel, heir to the mighty Phantomhive Empire, and his loyal butler Sebastian also board the ship to get to the bottom of the intricacies of a secret society. It is said that the "Wissenschaftliche Gesellschaft Aurora" experiments with unauthorized human experiments in order to bring the dead back to life.

A corpse actually awakes at the exclusive gathering of society - only to attack the living shortly afterwards as a bloodthirsty zombie. But it gets even worse, because there are countless more dead in the cargo hold. While the Campania is heading for a catastrophe at full speed, the fellow travellers Elizabeth, the two Shinigami Grell Sutcliff and Ronald Knox as well as the Undertaker hold further surprises in store for Ciel and Sebastian …

Piece by piece the long-awaited film of the diabolical Gothic fairy tale is heading for its gruesome finale.

Over 23 million copies of Manga sold speak for themselves, don't they?!

You can see the film in these cinemas: