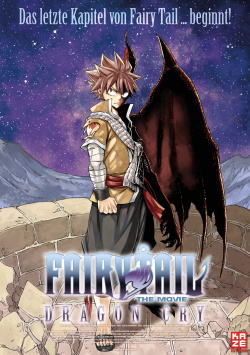 The grand finale on July 31 in German language

Fairy Tail starts its grand finale. 10 years after the start of the manga series, Fairy Tail is now heading for its climax. The last chapter of the adventure is introduced in the impressive feature film.

The mages of the Fairy Tail guild must search for a lost artifact with tremendous destructive power. The guild includes the dragon slayer Natsu, who can manipulate fire. With his accomplice Happy and his companions Lucy, Erza and Gray, he faces a wide variety of challenges. Their latest adventure takes them to the kingdom of Stella, a deserted island surrounded by steep cliffs. A heroic battle awaits them there, which will decide their fate.

Hiro Mashima has personally thought up the story of the new film and written a 200-page storyboard. The Manga Fairy Tail developed by him started in 2006 in Kodanshas Weekly Shonen Magazine and has since celebrated great international success. Over 60 million volumes of Fairy Tail have already been sold worldwide.

2009 was followed by an anime TV implementation, which currently comprises 277 episodes. KAZÉ Anime has released the TV series about Fairy Tail 2017 on DVD and Blu-ray.

Fairy Tail: Dragon Cry was the highlight of the KAZÉ Anime Nights 2017 only a few weeks after the Japanese premiere. Now the film will also be shown in the German dubbed version on the big screen.