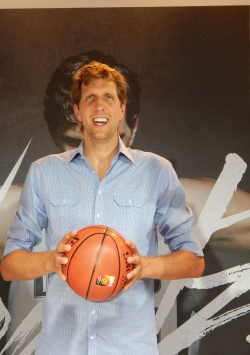 He is one of the biggest stars of American basketball, an idol and a role model for millions of fans. The success story of Dirk Nowitzki is an inspiration for many young people. Even if the likeable Würzburg man can't quite comprehend the hype surrounding him, the enthusiasm that the 2.13-metre man arouses among his fans not only in the USA is undeniable. This has now also become clear in Frankfurt, where Nowitzki gave the only press conference on the documentary film "The perfect throw". In addition to numerous media, many fans from all over Germany came to take a look at their idol.

Accordingly, the press event was also very spectacular. In front of the ING-DiBa headquarters on Theodor-Heuss-Allee, a fan grandstand was set up with the best view of the small interview stage and a large LED screen guaranteed everyone present, whether journalist or fan, a perfect view of the exceptional athlete. Punctually at 12 o'clock Nowitzki was announced by presenter Frank "Buschi" Buschmann and then took a bath in the crowd, accompanied by booming rock sounds, before he took a seat next to Buschmann on stage. Already here it became clear that Nowitzki is not one of these unapproachable superstars, but despite all his successes (and defeats) has remained pleasantly down-to-earth.

The first part of the almost 75-minute press conference was a relaxed conversation between the former basketball player and popular sports commentator Frank Buschmann and Dirk Nowitzki. Both spoke about the past season of the Dallas Mavericks as well as what the coming months will bring for the club. Here the conversation also came to the subject of money, as Nowitzki had waived part of his handsome salary so that the Mavericks could buy good new players. Nowitzki revealed that his mother Helga was still responsible for his finances and laughingly added that she was still giving him his pocket money.

After the unavoidable question as to whether the 2015 European Basketball Championships would still be an issue for him was answered with the statement that he would be so happy to play for Germany that he did not want to make the cover yet, although participation would mean almost continuous training, the conversation turned towards the film, which will be shown in cinemas all over Germany on 18 September. To this part of the press conference also director Sebastian Dehnhardt ("Klitschko") and producer Leopold Hoesch came on stage. Dirk Nowitzki said that it took him some time to become friends with the idea that a documentary about him should be filmed, since he was more of a person who kept his private life to himself. But luckily Hoesch and Dehnhardt were able to convince him of the project, "Nowitzki - The Perfect Throw" has become a very good film in every respect - but more about that in my detailed discussion on the cinema launch.

Amüsant was to learn that the first conversation between Nowitzki and Dehnhardt took place during an advertising shoot of the ING DiBa on Mallorca, when Denhardt and Hoesch had long since begun with the production. They also told about the first meetings with Nowitzkis mentor Holger Geschwindner, who followed the press conference from a safe distance from the lobby of the ING DiBa, about how they got old shots of "little" Dirk during his early basketball experiences and about how lucky it was for the film to get his mother in front of the camera next to Nowitzkis father and sister, who had never given an interview before.

All in all it was a very relaxed and interesting conversation, which ended with some questions from the press and fans and a subsequent photocall. Actually, the many individual interviews would have been on the program right after that. But Dirk Nowitzki did not miss the opportunity to sign numerous autographs and to be available for photos with his fans. In the end, the NBA star left a completely sympathetic, down-to-earth impression and revealed to his fans an accessibility that made the long journey absolutely worthwhile for some.

More about the feature film can be found here on Frankfurt-Tipp!