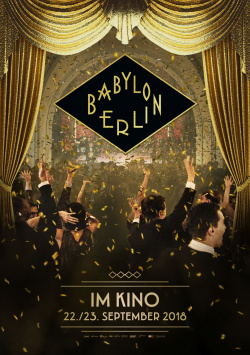 A TV production from Germany, celebrated by critics and audience alike, makes it onto the big screen in a unique way: The series "Babylon Berlin", celebrated not only for its exciting, complex story, but also for its great set and costumes, is coming to the cinema. Anyone who has already seen the series will be able to confirm that it is in very good hands there purely visually.

The X Rental brings the worldwide acclaimed and award-winning 20s success series with exclusive goodie bags and many surprises for a weekend nationwide unique in 150 cinemas! On September 22/23, 2018, viewers in Frankfurt can immerse themselves in the world of "Babylon Berlin" at the first series event of this kind and not only see but experience the stories of Commissioner Gereon Rath in the pulsating city of sin! All 16 episodes of the first two seasons of this series, recently extended by a third season, will be shown.

"Babylon Berlin" is based on the internationally successful bestseller series by Volker Kutscher around Commissioner Gereon Rath in Berlin of the 1920s and tells the whole panopticon of the most exciting city in the world between drugs and politics, murder and art, emancipation and extremism. This is exciting, rousing, surprising and intoxicating. An outstanding TV experience that looks completely different in the cinema than it does on screen. As authors and directors, Tom Tykwer, Henk Handloegten and Achim von Borries are responsible for the series.

The advance sale has started!

In Frankfurt the cinema event can be experienced at CINEMA and CINESTAR METROPOLIS.

Further information can also be found at: http://www.x-verleih.de/babylon-berlin/