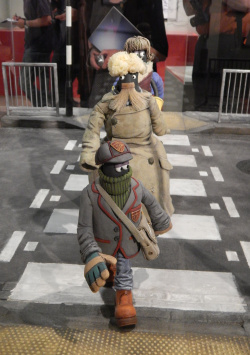 Wallace and Gromit guest in Frankfurt:THE ART OF AARDMAN

The Art of Aardman

In 1976 Peter Lord and David Sproxton founded the studio Aardman Animations. Today, forty years later, 74 short films, six feature films, ten series, various advertising and music clips and four Oscars later, Aardman Studios have long since become a worldwide cult. Their hand-made figures and the elaborate stop-motion process in which they produce their works make the work of Aardman's animation artists so unique. Especially in a world dominated by digital media, this analog aesthetic is something very special.

The exhibition "The Art of Aardman" at the Deutsches Filmmuseum pays tribute to the work of Aardman Animation in a wonderful exhibition. In the foyer in front of the exhibition as well as in three exhibition rooms, the process of creation is traced in the studios, from the first idea to the final shoot. Examples from 37 different film productions of the studio, including of course "Wallace & Gromit", "Shaun the sheep", "Hennen run" or "The pirates! A bunch of "strange guys" show the different production phases that are necessary until the lovable clay figures can be brought to life. 123 pictures, twenty figures and twenty sets as well as numerous video contributions make the walk through the 400 sqm exhibition space a very special experience.

The exhibited sets show how much love for detail Aardman Animation works with. As a viewer, you can get lost in the details, which are often only visible for fractions of a second when watching the films. After just a few steps, the exhibits conjure up a smile on the faces of the visitors, which disappears at the earliest at the exit. Alone in front of the showcases with the sets you can stop for many minutes and see countless playful details. This is even the case with sets like an antique tent, which was only visible for a few seconds in the film. The exhibition, which was originally conceived for Paris and will travel to Frankfurt for further stops around the globe, pays tribute to each individual department at Aardman and impressively shows how entertaining it is that the wonderful films and advertising clips only work if all the creative forces work together perfectly. And like the works of the studio, the exhibition is also something for the whole family. Probably in many cases it will even be the case that the children will have a hard time getting their dad or mum away from the showcases. Go in!!!

A bilingual (English/French) catalogue is available in the museum shop, which was conceived for the first stop of the exhibition in Paris. The fact that there are no German lyrics should not prevent anyone from buying this beautiful volume. In addition to texts by Peter Lord, among others, the book contains masses of photos, drawings and illustrations of the exhibits from the show. On 227 pages, the individual stations of the exhibition are traced and supplemented. In addition to the images that beautifully illustrate the creative process behind the individual work steps, some accompanying texts increase the information content of the book. Certainly, looking at the exhibits with one's own eyes seems much more intense than seeing them depicted in a catalogue. But as a supplement to and reminder of the visit to the exhibition, this book is an absolute must for all Aardman fans! Absolutely recommendable!

Homepage of the exhibition: http://deutsches-filminstitut.de/filmmuseum/ausstellungen/sonderausstellung/aardman/