Punk rock may not be rocket science, but it’s only the smartest and sharpest bands that make the grade and stay the course. Formed in London in 2009, Booze & Glory started life as a straight-ahead salute to the rowdy street punk and Oi! bands of the late ‘70s and ‘80s UK scene. Thanks to some of the most infectious songwriting to emerge from the capital’s mean streets for a long time, and with a heroic and ruthless dedication to playing live, the band were steadily embraced by a colossal international fan base, with debut video London Skinhead Crew notching up in excess of 13.000.000 views on YouTube along the way. Triumphant trips to Asia, South America, the US and pretty much anywhere that would have them ensured that Booze & Glory’s first three albums – Always On The Wrong Side (2010), Trouble Free (2011) and As Bold As Brass (2014) – became essential listening for fans of balls-out and snotty rock’n’roll. But far from resting on their laurels and sticking to a tried-and-tested formula, Booze & Glory are now poised to reveal the subtle but unmistakable evolution that their music and aesthetic have undergone in recent times. The four-piece have come of age on album number four, the appropriately-titled Chapter IV (recently repressed by Pirates Press Records) Always an international band, with past and present members hailing from Poland, Ireland, England, Sweden and Greece and the current line-up all possessing migrant blood, Booze & Glory are proudly anti-racist, but they are also not a band concerned with shouting about politics. Instead, the rampaging, lethally melodic anthems contained on Chapter IV are an exhilarating exercise in positive thinking, the power of the people and the importance of seizing the day and living life like there’s no tomorrow (which, given recent events, may well turn out to be the case!). With shades of everything from One Way System and Stiff Little Fingers to the Dropkick Murphys and Rancid, Booze & Glory’s all-encompassing punk rock sound is a loud, proud and big-hearted antidote to fake plastic pop stars and off-the-shelf punk posers. With songs touching upon everything from the joys of unity to singer/guitarist Mark’s recent battle with cancer, all human life is present and correct, with every last track sounding like a custom-built anthem for the masses. There is evidence of instinctive musical growth here too, as showcased on folk-fuelled opener Days, Months, Years and the riotous, soulful clatter of Violence & Fear: songs with plenty to say and no shortage of fresh ways to say it. Booze & Glory claimed 2017 as their own – the band played over 100 shows on 4 continents and they are not planning to stop anytime soon. 2018 saw East European tour, week in Spain followed by US and Canada, Australia and Asia. The band appeared on many European festivals including the biggest outdoor festival Pol’And’Rock where the band played on the main stage in front of 500.000 people. In October 2018 the band recorded recorded 4 new songs with producer Mathias Farm (Millencolin) in his SoundLab Studios in Sweden. In 2019 Booze & Glory will celebrate 10 years anniversary. In January the band will play Persistence Tour in Europe followed by 4 weeks tour with Dropkick Murphys in the US. New album will be released in September 2019 and European headline tour is planned for late 2019. More info to follow. 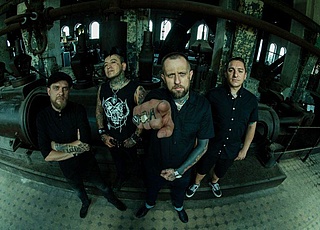