For all friends of Dropkick Murphys, The Real McKenzies, The Rumjacks, The Pogues etc.

The Moorings are an ultra-energetic quintet famous for delivering an efficient mix between Celtic folk and alternative rock. Since 2011, The band has been faithful to the traditional themes of the Anglo-Saxon repertoire. It has been chosen many times to share the bill with the most respected bands of the genre such as The Dubliners (at la Cigale - Paris), The Pogues (at l’Olympia – Paris) or The Dropkick Murphys (at Rock im ring - Italy).

Their appeal for Irish music and Punk rock has been revealed in Pints & Glory their 1st EP back in 2011. A live record titled ‘La Cigale Unplugged’ has also come out in 2013. The second EP ‘Nicky’s Detox’ released in fall 2014 highlights a couple of songs in French. The new record ‘Unbowed’ completed in spring 2017 asserts its own style. It mainly seduces by the production’s quality and the fine songwriting of its 12 tracks. Original material sung mostly in English mixes bitter protest songs (Captain Watson’s Gang, Mutins), folky ballads (Posy of Lily, The Mariner I Used To Be) as well as powerful punk rock songs reminding the Sex Pistols (Another Drinking Wound, Ice Cold Jar Of Whiskey...). Still true to their French origins, this colourful opus encompasses 3 songs in their mother language including ‘Amsterdam’ a cover from the famous Jacques Brel.

The Moorings go from festivals to club stages, from pubs to bars all over Europe! The band has played the legendary Montreux festival in 2016. 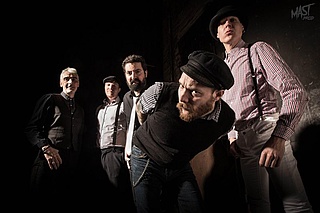