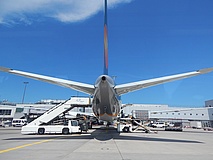 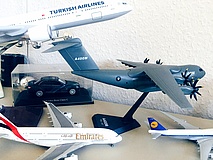 Departure into September, and I mean that literally! Because at the airport, yes, the Visitor Terrace has been newly open for some time. One of the most popular destinations in the Rhine-Main region is available again since the summer holidays. The visitor terrace is bigger, has got a really chic new flooring and nice seats - partly under shady pavilions, partly in the sun. But really the very best thing: thanks to an overthrow protection, which has cut-outs for photo shoots, the terrace can now be entered without a security check. Sounds exciting, doesn't it? Makes me want to head over there right now to spy the recesses!

An ideal addition to visiting the terrace is a airport tour, which can be booked directly on site. My personal favorite would be yes the Sunset tour: lights and sunset. To experience this special atmosphere of the airport in the evening hours with its many lights on the runways is certainly unique. (120 minutes) However, plane-spotting is just as good. In Frankfurt, spotters like to gather at the A5, but also at many other locations.

I deliberately don't say spotters now, because that sounds like "tense-look-through-the-hedge." ;-)

But while we're on tour, we're immediately drawn to Darmstadt. Why Darmstadt? Because on September 17 on the occasion of the exhibition &raquo;CHIC! Fashion in the 17th Century&laquo; a &raquo;Museum Night of Costumes&laquo; of the most imaginative is happening: How about, say, a selfie activity for gentlemen in the style of Baroque beard and hairstyle fashion? Thought up by the resident TU. Which woman, however, rather wonders which man suits her, who finds herself at the fashion chat with piano accompaniment under the motto &raquo;Benjamin, ich hab' nichts anzuzieh'n or Which man is dressy for the woman&laquo;. Whether lovers of the anti-striptease or friends of the Aufbrezeleien in the animal kingdom, the organizers have simply amusingly thought of everything. Therefore times simply after Darmstadt.