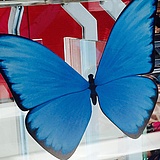 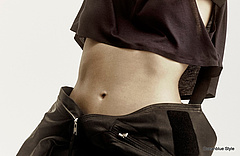 From the rooftops of the city, let's descend today and plunge right into summer fun: the great thing? Rain or shine, indoors or out, there's something for everyone. Because Frankfurt is still hugely in fashion this month. Exhibition organizers, creative minds and artists have once again come up with some great ideas to keep us entertained. Inviting fashion designers to museums is all the rage right now: whether it's Dries van Noten in Antwerp or Alexander McQueen and Yohi Yamamoto in London. But Frankfurt is not a fashion city? Yes, yes, we can only make money :-) If you allow Milan or Paris to be the only benchmark, you are welcome to continue believing the cliché.

Meanwhile, we stroll into the <link http: mmk-frankfurt.de de home _blank>Modern Museum to admire the creations of designer Kostas Murkudis, who is one of Germany's most influential fashion designers. Over the past 20 years he has collaborated with many international labels and is one of the few German designers who have made it to international prominence. As Creative Director he developed collections and looks for companies such as Balenciaga, New York Industrie, Pringle of Scotland, Closed or most recently Ter et Bantine. From 1986 on Kostas Murkudis worked intensively with the designer Helmut Lang for seven years before founding his own label KOSTAS MURKUDIS in 1994 and from then on he always cooperated with artists for his designs.

So inspired and intoxicated, it is recommended especially for all leather jacket fans still the detour around the corner, from the Braubachstraße directly to the Römer in the newly designed <link http: www.historisches-museum.frankfurt.de _blank>Historisches Museum, where the "Modeatelier Erika Segel-Reinhardt" presents a creative rebel and her visionary designs for leather jackets from the 50s. A visit to a museum calls for a breather, after all, and we always like to take those in one of the numerous <link insidefrankfurt s shopping cafe-kultur-mit-mainblick-3-lieblingsorte.html _blank>museum cafés.

send by e-mail
print
Above the rooftops of Frankfurt - 3 rooftop bars
Wanderlust in Frankfurt? Quickly cured with 5 ideas