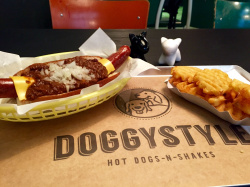 Frankfurt shares a very special relationship with the fast food classic hot dog, after all, it is said to have been invented in our fair city by Coburg butcher Johann Georg Hehner in 1847, before being served in its still familiar form by German migrant Charles Feltman in Coney Island in 1867. From here, the boiled sausage in a soft wheat bun started its triumphal march around the globe. Over the course of time, many places have established their own hot dog varieties. But whether with cabbage or fried onions, with mustard or ketchup, this snack is as popular as ever, even 150 years after its invention.

Sam Kamran is also a big hot dog fan. Having already made a culinary impression in the city with Fletcher`s Better Burger, Pizzeria Montana or Caf&eacute; Hauptwache, he is now trying his hand at a hot dog shop on Oeder Weg in the direct vicinity of the CineStar Metropolis cinema centre, which goes by the ambiguous name of Doggystyle. The name-giving dogs meet the guests when entering the interior on the amusing wall painting and on the tables in the form of salt and pepper shakers. The interior is simple but functional and invites you to relax. The only question that remains is: How do the hot dogs taste?

There are seven variants to choose from. And each of these variants can be ordered alternatively with beef sausage, chili beef sausage or cheese beef sausage. Of course we tried the Frankfurt Dog, which is served with apple sauerkraut, stewed apples and fried onions. But the spicy Chili Dog with chili con carne, cheese and fresh onions was also on our menu. Our conclusion: the hot dogs taste really delicious. Especially the pleasantly spicy chili beef sausage in combination with the cheese and the chili con carne is a real recommendation. The soft brioche bun in which the sausages are placed has a pleasant taste of its own, which goes very well with the honey mustard, which is used as a base for all hot dogs.

The prices are not really low, but you can also taste that good ingredients are used here. For a menu with hot dog, fries and drink you will pay between 8 and 11 Euro. Extras include nachos, guacamole, chili con carne, corn and sweet potato fries. Only the milkshakes, which are already announced in the name DOGGYSTYLE - Hot Dogs-N-Shakes, the guests must still do without. But as soon as the machine necessary for the production is there, also numerous Shake creations stand on the map. Our conclusion: hot dog fans and all who want to become one should definitely take a look here.