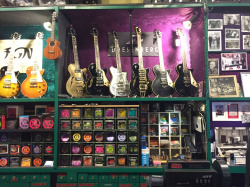 Cream Music - Where music history is made in Frankfurt

There are some places in the city that like to be called "Institution". But if that predicate applies to any store, it's CREAM MUSIC. Founded in 1904 at Taunusstraße 24 as Musikhaus Heinrich Hummel, it moved a few houses away to Taunusstraße 43 after the First World War, where it could be found until the summer of 2018. After Heinrich Hummel's untimely death, his wife Babette and their two daughters continued to run the business. The legendary store was then known as Musikhaus B. Hummel for a long time before it was renamed CREAM MUSIC. Today, it is still firmly in family hands - now in the hands of the fourth generation. And while everything here is state-of-the-art in terms of instruments and technology, a lot of nostalgia wafts through the business premises. The red plush sofa, on which quite a few rock greats have taken a seat, can't be missing here, as well as the old cash register, at which already the guitar was paid for, which was acquired by none other than Elvis Presley and which can still be seen in Graceland today.

No wonder, then, that brothers Bernie and Robert Hahn and cousins Stefan and Martin Hahn were practically born with a love of music. If music greats like John Lennon, the Rolling Stones; Frank Sinatra or Percy Sledge acquired guitars from the family, were in business or even private guests, then there is no other career path to follow. And so it's not surprising that the four of them not only sell instruments, but also make music themselves in various bands after business hours. So you can be sure when you visit CREAM MUSIC: The gentlemen here know what they are talking about.

After all, there is also a great legacy to uphold. For it was here that very special guitars celebrated their German premiere, the first Hammond organ sold in Germany came from the music store and also the recording studio founded in 1978 have led to the family name and CREAM MUSIC standing for a very special quality worldwide. And this should remain with Frankfurt for as long as possible.

The music house has already survived many crises and changes, but has not been able to avert the move that has been looming for some time. Without CREAM MUSIC, the Bahnhofsviertel is poorer by an important and very special institution, in which music history can be absorbed with every breath and in which, as a musician, you are delivered a service in terms of equipment and advice that is second to none. But it's nice that this very special place will stay with us elsewhere.