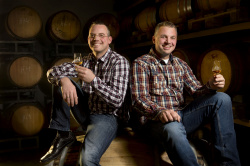 Maintaining family tradition and continuing it with new ideas and the courage to innovate - that is the recipe for success of the Henrich distillery from Kriftel, which is already being run by the third generation of brothers Holger and Ralf Henrich. One of the traditions that have played an important role since the foundation of the company - at that time still "Obsthof am Berg" - is the respectful and sustainable treatment of nature and its products. This was true for the fruit farm where it all started and it is still true for the distillery today. No wonder, actually, since the distillery was founded precisely on the basis of this philosophy. Since it was clear to Holger and Ralf Henrich's grandmother that nothing should be thrown away and everything that is harvested should also be used, the distilling rights were acquired in 1983 and overharvests of apples, plums, mirabelles and pears were distilled. From grandmother's herb garden, a herbal liqueur was created, which can still be bought today in the farm shop of the distillery.

Father Horst Henrich already proved that continuing traditions and progress do not have to exclude each other. This was initially continued by Holger Henrich, who became managing director of the family business in 2004. Together with his father, he was able to put the new cappuccino distillery into operation in 2006, which laid the foundation for today's Henrich Distillery. Not least due to the decision to store the brandies in wooden barrels in the future, the distillery was already awarded silver twice by the DLG in 2007. The next milestone was reached in 2008, when a real heart project was started with the "gilors Single Malt Whisky".

With this excellent quality whisky from the Vordertaunus, completely new paths were taken for the first time, which Holger Henrich has consistently continued since 2010 with his brother Ralf, who joined the company as another managing director after Horst Henrich retired from active business. And this pays off, as impressively proven by awards such as "Newcomer of the Year" (2012), "Distiller of the Year - Bronze" (2013), gold, silver and bronze at the Craft Spirits Festival "Destille Berlin" (2018) or 2017 DESTILLATA - Nationssieger Deutschland (best German distillery in the field of participants). 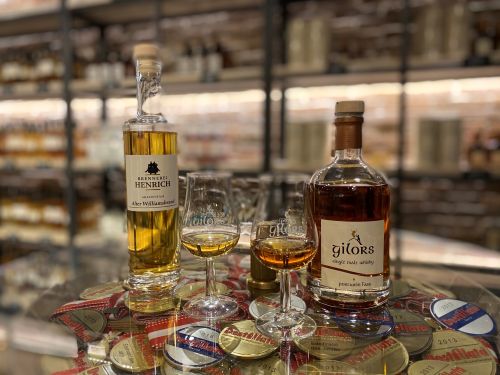 In addition to the classic brandies and whiskey, the repertoire of the Henrich distillery now also includes liqueurs, rum and a very special gin: The Gin Seven. This is a truly unique homage to one of Frankfurt's favourite dishes. With the help of maceration, it has been possible to transfer the essences of the seven herbs of the "Grie Soß" to the alcohol. In combination with the gin-usual juniper gives the gin seven a quite incomparable taste, which combines many different nuances perfectly with each other.

This gin, which reinterprets Frankfurt tradition in a congenial way, clarifies very well what the Henrich distillery stands for: for high craftsmanship, for the sustainable use of first-class ingredients, for innovative spirit and for attachment to the region. You can be curious, what comes in the future so everything from Kriftel!

More info you can also find at: www.brennerei-henrich.de