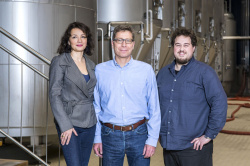 Tradition is nice, and sometimes it's important to reflect on it. But looking back should never stand in the way of big steps forward. Glaabsbräu has successfully mastered the difficult balancing act between tradition and innovation. Founded in 1744 and thus the oldest brewery in southern Hesse, the company was able to celebrate a major anniversary in 2019: The 275th birthday of the family business was celebrated with a lavish party in Seligenstadt. But at Glaabsbräu, they are not resting on their past successes, but building on them with new ideas and the courage to change. And so, four years ago, the brewery completely reinvented itself once again.

In 2015, a completely new brewing plant was built, making Glaabsbräu one of the most modern and innovative breweries in Germany. A new market presence and a new brewing philosophy are also among the company's new cornerstones. Glaasbräu places a lot of emphasis on brewing their beers completely natural and thus more demanding than the purity law. No chemicals, long maturing time and natural aroma hops!

This is what the consumer tastes and appreciates.

With a mixture of generational experience and the courage to innovate, Glaabsbräu has been able to establish itself in recent months as a kind of start-up with tradition. The attractive expansion of the product range has also contributed significantly to this. In addition to classic, partly award-winning varieties such as Pilsener, Hefeweizen, Naturradler, Export or Kristallweizen, Glaabsbräu also offers craft beers such as "Vicky loves Pale Ale" or the excellent "Hopfenlust" and "Reifeprüfung". A special highlight that underlines the brewery's innovative spirit particularly well is the seasonal, regionally inspired mixed beer drink "Glaab&acute;s Grie Soß". In 2020, "Glaab&acute;s Stöffche", a second Hessian brew speciality, was launched.

By the way, you can see for yourself how all these delicious beers are created. Because Glaabsbräu regularly offers exciting tours of the brewery. As a rule, the traditional company also relies here on a varied range of products that offers the right thing for every taste and every occasion. But in times of the Corona pandemic, the offer must unfortunately be reduced somewhat. The Classic Brewery Tour, during which visitors can immerse themselves in the exciting history of the private brewery and then experience first-hand how the beers are brewed, takes place in compliance with Corona hygiene regulations, in a shortened form and with reduced number of participants (10 - max. 15 people). A really nice and interesting guided tour, where the mixture of tradition and modern brewing art can be experienced in an entertaining way.

You can also look forward to the other tours as soon as they are feasible again:

If you also want to let your taste buds get their money's worth during a guided tour, opt for the Brewmaster Tasting. In addition to an insight into the new brewery, twelve beers - in-house and foreign - are tasted under the guidance of Julian Menner, master brewer and member of the German national team of beer sommeliers. Anyone who loves beer has surely dreamed of such an opportunity for a long time.

The Magical Brewing Experience is also dreamlike, with magician Thorstein Gerstentreiber turning the tour of the brewery into an evening full of magic and supernatural phenomena. Held every 2nd and 4th Friday of the month, the tour is not only informative, but also leaves visitors in awe.

If you want to experience something really special, opt for the Brewery Experience - with a ride in the Glaabsbräu covered wagon. This tour not only takes you through the family exhibition and the new brewery, followed by a tasting. In the covered wagon it then also goes through the picturesque Seligenstadt - simply beautiful!

You see, the brewery tours at Glaabsbräu in Seligenstadt are a very special experience!

You can find all further info, the current hygiene concept and booking options at:
https://glaabsbraeu.de/brauereifuehrung/

The pop-up restaurant NIU I Asian Steakhouse at the Kempin ..
ANTIPODEAN Gelato - Moments of Happiness for Ice Cream Lov ..