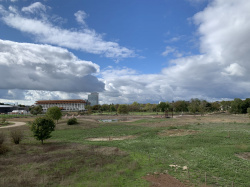 Planning for the transformation of the old racecourse began back in 2015. In addition to the construction of the new DFB Academy, a park was to be created on the site, with citizens closely involved in its design. An online survey was conducted in the spring of 2016, after which the first planning drafts were presented in the summer. But then it was over for the time being: Due to the well-known legal dispute, all further planning had to be paused between 2017 and 2018. Only after the ruling could it continue in the spring of 2019. For the design of the calisthenics facility, the calisthenics club was involved and for the planning of the playground, 23 children from the Frauenhofschule in Frankfurt Niederrad were able to submit their wishes in a creative and playful way. 2021 then the final name "Rennbahnpark" was decided. After the company Fichter from Raunheim had been awarded the contract for the gardening and landscaping work, the groundbreaking ceremony could finally take place on 01 August 2021.

Nearly one year later, on 24 September 2022, the Rennbahnpark was ceremoniously opened. After five years of planning and one year of construction, a park close to nature has been created, which has something to offer for all large and small Frankfurt residents. Certainly: Some places still look a bit sparse. But it becomes clear during the first walk over the area, how it will look here in a few months and years. What is particularly nice is that not only a new recreational space for people has been created here. The natural areas - especially the valuable sandy grasslands, which are sometimes tended by sheep - also offer birds, insects and other animals new retreats in the city. Originated are the new sandy meadow areas by a hay mulch transfer from the Schwanheimer dunes, one of the most beautiful oases before the gates of Frankfurt.

"Something quite unique has been created here," said Rosemarie Heilig, head of the climate and environment department, at the opening: "What makes it special are its meadow areas and, in addition, the nearby forest: this creates a special natural experience in the middle of the city, into which the various activity offerings such as calisthenics, play and sports facilities and rest areas are wonderfully integrated." In addition to the calisthenics facility, there is also a soccer field, basketball court and table tennis tables. The park's racetrack past is evident in the beautiful children's playground, as it is in the loop trail that echoes the shape of the racetrack.

In addition to sports and games, there are plenty of places for people to relax. With a chat at the small lake, with the view of the city of the Skyline View or with the walk to the lookout, which offers a mad view of the entire plant, it can switch off well. At the same time, however, the issue of nature conservation has also been taken into account: "With the Rennbahnpark, we are closing the gap between the green belt and the banks of the Main. We have built a new park here in the landscape conservation area, which at the same time remains wilderness, with rare sand grasses, cave trees and the valuable sandy grassland. Barn swallows and bats will also continue to have a home in the old horse stable," explains Karin Mosch, deputy head of the Parks Department.

As already said: it will still take a little while until the racecourse park will literally be in full bloom. Nevertheless, it is already clear that a recreational area for all age groups has been created here, which will certainly develop into a popular destination in Frankfurt in the coming years. One may be curious how this place will develop still further. 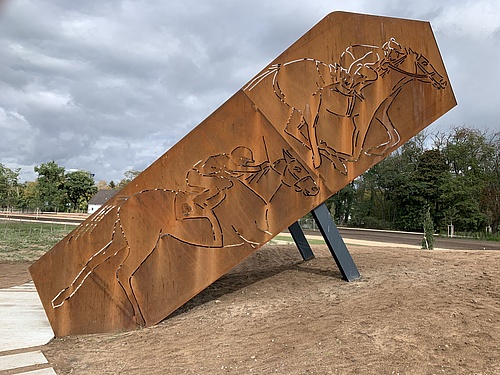